The Demands of Love

Christ jesus declared that the law and the prophets were contained in the divine command which says, "Therefore all things whatsoever ye would that men should do to you, do ye even so to them." The Jews of his day demanded a strict obedience to the letter of the law, a rigid observance of rites and ceremonies which had become meaningless, and which demanded merely an outward conformity. Christ Jesus cast aside creed and dogma, and revealed the spiritual meaning of law. He taught and demonstrated that true obedience is expressed in love to God and love to man, and he proved that such love is a divine healing agency. He demanded active proofs of obedience. He said to his followers, "Not every one that saith unto me, Lord, Lord, shall enter into the kingdom of heaven; but he that doeth the will of my Father which is in heaven."

In "Miscellaneous Writings" (p. 250) Mrs. Eddy says of affection, "No word is more misconstrued; no sentiment less understood;" and in the next paragraph she further says, "I make strong demands on love, call for active witnesses to prove it, and noble sacrifices and grand achievements as its results." Sometimes we are misled by something which calls itself love, but which, when put to the test, fails to fulfill the requirements of Love. There is a tendency in the unawakened thought to mistake the dross of sentimentalism for the pure gold of active love, to substitute the letter of love for its spirit. 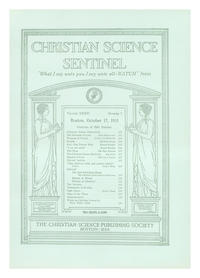