That we have found the way to Christian Science fills us...

That we have found the way to Christian Science fills us with deep gratitude. My little grandson, five years old, became suddenly paralyzed, could not speak, and lost consciousness. As the child's parents were away at work during the day, I was alone with him, and so I immediately asked for Christian Science treatment. My fear vanished at once, and wonderful peace came over me. I knew that the child was under God's protection, and that there is in reality no death. When the child's parents, who were not interested in Christian Science, came home, to reassure themselves they sent for a doctor, who did not know what to say about the condition. The next day another doctor diagnosed brain fever, and ordered that the child be taken to a hospital. The following day the doctor at the hospital notified us that if we wished to see the child alive we must come at once.

With the consent of the parents the Christian Science practitioner continued to work for the child. No change took place in his condition in the hospital; he remained unconscious. After a week had passed the doctor was willing for us to take him home again. Here, at home, he awoke to consciousness in a few days with a bright laugh, and the healing began to progress steadily. The sick-fund doctor came nearly every day. He was surprised at the good progress, and when I told him the child was having Christian Science treatment he took even more interest in the case. In about ten days the child began to walk, and his speech returned gradually. In a short time he was quite well again. No medical treatment was given by the doctors during the whole time. 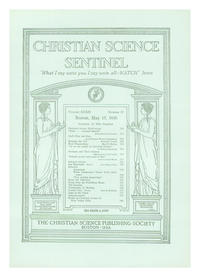