I wish to express my gratitude for what Christian Science has done for me. Over three years ago I was taken ill, manifesting very severe blood poisoning, my head and neck being badly swollen. I sought help through Christian Science, as I had done many times before, never failing to receive the desired relief. After a few treatments, a large boil came on the end of my nose and discharged for ten days. During this time two cores came out, one very large, through an opening on the outside of the nose and one from the inside, leaving a hole clear through the side of my nose. The condition of blood poisoning was met, however, and the opening on the side of the nose healed without leaving a scar.

Send a comment to the editors
NEXT IN THIS ISSUE
Testimony of Healing
When the desire to study Christian Science came to me... 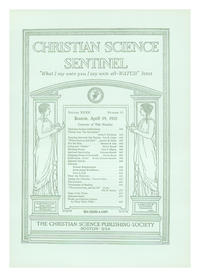