"Cast out the beam out of thine own eye"

Every honest Christian Scientist is striving to rid his thinking of the evil beliefs that tend to blind him and prevent his seeing the truth about his brother. The ninth commandment says, in part, "Thou shalt not bear false witness against thy neighbour." A true witness is one who sees man as God made him—in His image and likeness, spiritual; while a false witness is one whose concept of man is erring and material. Jesus showed how impossible it is to help others while one's own thought is darkened by materiality and sin, when he said, "First cast out the beam out of thine own eye; and then shalt thou see clearly to cast out the mote out of thy brother's eye."

One may feel that an error manifested by others around him is so pronounced and of such pressure that it is hindering his advancement. There is, however, a never failing remedy. One can look within, and see what it is in his own thought that is barbing the error. It may be fear, or it may be the belief that evil or disease is part of a person rather than erring, false belief. If one is believing in and fearing evil, he is harboring a beam in his own eye which will so blind him that he will be unable to see the unreality of the error that is deceiving his brother. 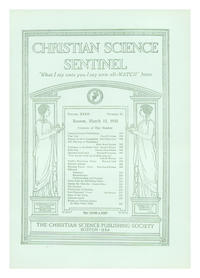