"What went ye out for to see?"

It is interesting to note that in his desire to ascertain the views of those surrounding him regarding John, and in elucidating the Baptist's mission, Jesus, as was oftentimes his wont when any subject was under discussion, addressed pertinent questions to his hearers. It would seem as if on this occasion he recognized three differing states of consciousness: first, the idly curious condition of thought, which runs hither and thither in its desire to find that which may satisfy a longing for something new, some fresh excitement; second, the worldly-minded, the opportunists, who are ever on the look-out for self-aggrandizement; third, the condition of thought which is reaching out for that which will satisfy its longings for something more spiritual than it has hitherto found. It is the last condition of thought which is ready for the lesson indicated in Mrs. Eddy's words on page 108 of the Christian Science textbook, "Science and Health with Key to the Scriptures," "Human experiences show the falsity of all material things."

In dealing with these differing conditions of thought, Christ Jesus varied his questions. Of the idly curious he questioned: "What went ye out into the wilderness for to see? A reed shaken with the wind?" This question Jesus did not answer, for such a condition of thought was not ready even for reproof or correction. It had brought no discernment to its search. John the Baptist could not be defined as a reed shaken by the wind. He was not of unsettled faith, for he had steadfastly borne witness to Jesus' mission. 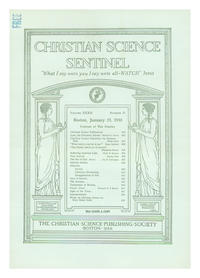