In reply to a writer in your issue of August 31, kindly...

In reply to a writer in your issue of August 31, kindly allow me to state that the proper title of the Christian Science church, founded by Mary Baker Eddy, is The First Church of Christ, Scientist, in Boston, Massachusetts, U. S. A., known as The Mother Church.

This church with its branches all over the civilized globe is, through the destruction of sin and sickness, performing a mighty work for mankind. The carnal so-called mind, ever anxious to destroy its destroyer, would fain attempt to separate the divine message from the inspired messenger so that the message might be adulterated and rendered fruitless. Christian Scientists everywhere rejoice that all such attempts are doomed to failure. The following words, written by Mrs. Eddy in 1896 (Miscellaneous Writings, p. 383), are true to-day:

Send a comment to the editors
NEXT IN THIS ISSUE
Article
It would appear that the writer of the article signed by... 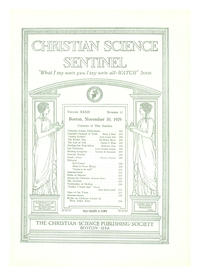