I was a very miserable woman about twelve years ago

I was a very miserable woman about twelve years ago. I was sick with asthma, bronchial troubles, and hay fever. The doctors advised change of climate in order that I might get relief. We moved about for some years, getting relief now and then. Finally we decided to return to our home town, and it was there I was healed through Christian Science in the climate I ran away from.

I had heard of Christian Science and of people being healed by it, so concluded to try it. I sought a practitioner and felt much better that night. I called to see her three times and was completely healed, and the ailments have never returned. Burns that would have been weeks in healing through materia medica have been overcome in less than a day. Blood poisoning, sick headaches, bad temper, and numerous other discords have been dissolved through knowing the truth as taught in "Science and Health with Key to the Scriptures" by Mary Baker Eddy. I also find Truth invaluable in locating articles that have been lost or misplaced. 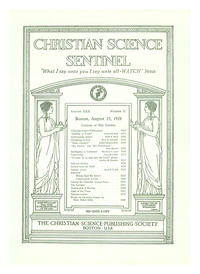