I wish to express my sincere gratitude for Christian Science....

I wish to express my sincere gratitude for Christian Science. A few years ago I was taken ill with tuberculosis, which I had contracted through my work. This complaint started with hemorrhages of the lungs. The third time this condition arose, the physician told my mother that I would not live very long and that she should grant my every wish. I was confined to my bed; attacks of heart weakness became more frequent; and as I could take hardly any nourishment, I was much weakened. My mother was very sad. I suffered greatly, too; for, having been trained as a nurse, I knew the phases of this disease. We tried allopathy, homeopathy, and treatment by natural remedies, but nobody was able to check the disease; and the cough grew continually worse. I went to a sanitarium for lung trouble for four months, and hoped for improvement; but, instead, my condition grew steadily worse. I was taken with double pleurisy and high fever. The sanitarium authorities notified my mother, and I was taken home.

The God sent His light into our darkness. A friend called my mother's attention to Christian Science and lent us a copy of Der Herold. I read the testimonies of healing in it, and was filled with new hope. I consulted the practitioner living nearest to me, and on the way I realized that God alone is able to deliver from disease. After the very first treatment I was as one born anew. I returned home with an appetite hitherto unknown to me. From that time my condition improved daily, and the hemorrhages and cough ceased. At the advice of the practitioner I bought the textbook, "Science and Health with Key to the Scriptures" by Mary Baker Eddy. After a few visits to the practitioner I was free from all the symptoms. Because my mother wished it I consulted my physician, and he corroborated what was already a certainty to me, namely, that I was healed. The days are full of happiness since Christian Science came into my life.

Send a comment to the editors
NEXT IN THIS ISSUE
Testimony of Healing
In September, 1908, I began the study of Christian Science,... 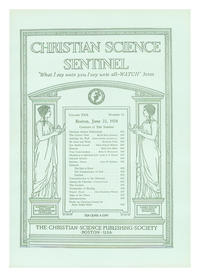