Christian Scientists should ever be mindful of the important fact that the world as a rule bases its estimate of the faith they profess upon the manner in which it is presented and lived by themselves. The average observer regards the individual as a fair representative of the class with which he is aligned, and in which he is received. In a questioning, critical, cynical age, therefore, one who assumes the responsibility of identifying himself with Christian Science should be scrupulously careful to endeavor to live up to its requirements.

Outside of Christian Science one may do many things which the world will be indisposed or slow to notice or to condemn, simply because one's personal conduct is a matter of indifference or unconcern to it; but in Christian Science, by reason of its generally recognized doctrines and standards, a professed adherent forgetful or disregardful of its rules and ethics invites comment, possibly derision. 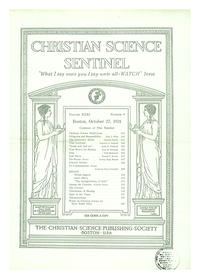