The Committee has written seventeen letters of correction for Kansas newspapers and periodicals, and the Manager of Committees on Publication has written one, all of which have been published. A letter was withdrawn after several interviews with the publisher of two objectionable books. These books he promised to withdraw from further distribution and sale, and to discontinue advertising them. Editors and publishers are beginning to appreciate more and more the efforts of Committees on Publication to protect their readers from imposition. The Committee has interviewed the editors of the two Topeka daily papers and is sending them regularly the Monitor. The Monitor is also being sent to the Governor and to the two United States Senators from Kansas. Appreciative editors are finding in the Monitor much interesting information from which to secure copy. During the year five hundred reprints have appeared in Kansas newspapers. Clippings received at this office indicate twenty-one columns of news space allowed for these reprints. A three-column cut of The Christian Science Pleasant View Home was published in several dailies. It is reported that full-text Christian Science lectures were published in nine newspapers. In one city fifteen hundred copies of a newspaper containing a complete lecture were distributed on the streets. The Assistant at that place reported a circulation of thirteen thousand five hundred and seventy-two copies of the paper, making an increase over the average circulation of five thousand seven hundred copies. 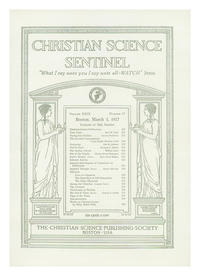