In your recent issue a correspondent says that "Christian Science...

In your recent issue a correspondent says that "Christian Science ... disparages, if not denies, thought of all kinds, seeing that it classifies mind itself, the organ of thought, with things which have no existence. It only recognizes 'mortal mind.'" This statement is so directly the opposite of the teaching of Christian Science that I shall be glad if you will grant me space for a brief correction. On page 468 of the Christian Science textbook, "Science and Health with Key to the Scriptures," Mrs. Eddy has given "the scientific statement of being," which reads in part as follows: "There is no life, truth, intelligence, nor substance in matter. All is infinite Mind and its infinite manifestation, for God is All-in-all." And on the following page she writes, "There can be but one Mind, because there is but one God; and if mortals claimed no other Mind and accepted no other, sin would be unknown." Mrs. Eddy uses the word "Mind" as a synonym for God, for surely without Mind there could be neither life, nor truth, nor love.

In line with the statement in the first chapter of Genesis that God, Mind, made man in His own image and likeness, Christian Science teaches that man, the expression of Mind, is not material, but spiritual. Christ Jesus taught and demonstrated man's oneness with Mind, God, and said, "The Son can do nothing of himself, but what he seeth the Father do: for what things soever he doeth, these also doeth the Son likewise;" and Paul wrote to the Philippians, "Let this mind be in you, which was also in Christ Jesus." 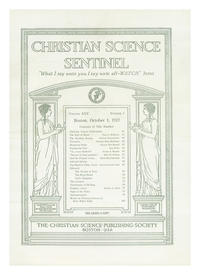