The happy expression on the faces of those who have become students of Christian Science, and the harmony and good health manifested in their lives, have often been the subject of comment by those who have not themselves become interested in this religion. These impartial observers have seen with satisfaction the good results of the practical application of this Science upon the lives of those who adhere to its teachings, although they do not comprehend the basic spiritual cause of the Christian Scientist's happiness.

Even in the face of what the world at large calls misfortune and disaster, the one who has the support of the teachings of Christian Science finds that he can go through these evil experiences buoyed up by the consciousness of good which these teachings impart. And this consciousness is not a stoical setting of the so-called human mind against depression or suffering caused by sorrow, disease, or evil of any kind; intrinsically, it has nothing to do with the human mind, but is entirely separate and apart from its finite concepts. Such consciousness is spiritual, and is derived from God. Being derived form God, or Spirit, as Jesus described Deity, it partakes only of the elements of Spirit; hence, it has nothing in common with the finite, temporal, material elements of the so-called human mind. Paul described this spiritual consciousness when he said, "Let this mind be in you, which was also in Christ Jesus;" and it is this Mind of Christ that the Christian Science student is endeavoring to have and to manifest in his life, both for his own benefit and for the aid he may be to others.

Send a comment to the editors
NEXT IN THIS ISSUE
Article
Good Morning! 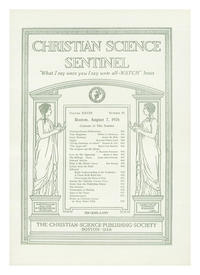