It is deep and sincere gratitude that prompts me to...

It is deep and sincere gratitude that prompts me to write this testimony of a very wonderful and beautiful demonstration of Truth which I witnessed a short time ago. My small son, six years old, came home from school one noon crying with a severe earache. I declared the truth for him, but for the rest of the day the pain was intense. He informed me in the evening that he had pushed a green kindergarten peg into his ear; whereupon I called a practitioner for help, which was lovingly given. The pain subsided almost at once, although the ear was sensitive to the touch. The child slept the whole night through, and for the next three days was a most normal boy, eating and sleeping remarkably well. Although he was very persistent that he had pushed a peg into his ear, I began to doubt and to wonder whether he really had or not. As his ear still remained sensitive, I decided to have it examined by a physician. Upon examination he declared there was no peg in the boy's ear, stating that had there been a peg there for any length of time whatever, the child would have been in great pain and unable to sleep or eat. On hearing this, I was immediately relieved of all fear, and the practitioner was asked to discontinue the treatments. Four days later my small son remarked, "Well, there is a peg in my ear;" but no attention was paid to him. However, on his being insistent and declaring it was there, a member of the family looked into his ear, and to her great astonishment there was the peg. With her assistance he pulled it out himself. It was three quarters of an inch in length, and not one particle of the green paint had come off. Is it any wonder that I am grateful for this wonderful truth? And this is only one of many demonstrations which have come to us.

Send a comment to the editors
NEXT IN THIS ISSUE
Testimony of Healing
I should like to tell of an experience which revealed to... 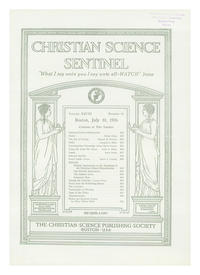