The Son of God

ONE of the reasons for the persecution of Christ Jesus was that he called himself the Son of God, and acknowledged no other sonship. This angered the people, because they thought he was claiming superiority for himself, whereas, on the contrary, he was claiming nothing for himself but all for God. Simon Peter was inspired to speak an eternal fact when, in response to the Master's yearning to be understood, he said, "Thou art the Christ, the Son of the living God." In all Christian Science churches every Sunday these comforting words from the first epistle of John are reverently read: "Beloved, now are we the sons of God." What great power would be developed if each listener realized, even in a small degree, what it really means to be the son of God!

Jesus lived up to his sonship, acting the part of a son, claiming for himself by inheritance all that the Father had, while recognizing the Father as supreme. He was the servant of the people, ready to serve in the humblest capacity, even to the washing of his disciples' feet—and he was the Son of God. On page 226 of "Science and Health with Key to the Scriptures" Mrs. Eddy writes of Christian Science as "asking a fuller acknowledgment of the rights of man as a Son of God, demanding that the fetters of sin, sickness, and death be stricken from the human mind and that its freedom be won, not through human warfare, not with bayonet and blood, but through Christ's divine Science." Her teachings clearly show that God is all-intelligence, not injecting His intelligence into matter in any form, even though mortals call that form man. 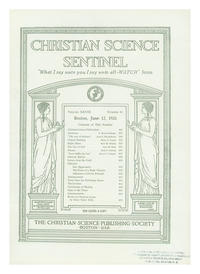