In a letter entitled "The Future and Christianity," published...

Lester B. McCoun, Committee on Publication for the State of Nebraska,

In a letter entitled "The Future and Christianity," published in the Omaha Bee recently, in mentioning what he styles "creative periods in religion," a contributor goes on to say that the West has produced "nothing more respectable than Mormonism, spiritualism, and Christian Science."

Now Christian Science may not be exactly in accord with your contributor's idea of Christianity, but that does not detract from its reality or respectability. And lest there be any misunderstanding on the point on the part of any of your readers, we may add that Christian Science cannot properly be classed with the other religions named above, as may be quickly learned by examining the book, "Science and Health with Key to the Scriptures" by Mary Baker Eddy. This book contains an entire chapter showing plainly wherein the religion of Christ Jesus disagrees with spiritualism. Furthermore, Christian Science was never created by any individual or group of individuals. On page 1 of her book, "Rudimental Divine Science," Mrs. Eddy has defined Christian Science as "the law of God, the law of good, interpreting and demonstrating the divine Principle and rule of universal harmony." One may readily realize that there must be a law of God, a law by which divine goodness becomes apparent and operative in all that proceeds from God. It is not difficult to see that the ancient patriarchs of Biblical record enjoyed the benefits of this law to the extent of their understanding, and that Christ Jesus practiced it in its purity and simplicity in the healing of the sick, the cleansing of the sinful, and the raising of the dead. It is known that this law was lost sight of about three hundred years after Jesus proved his divine commission by the healing works. Mrs. Eddy has rediscovered, not created, this religion of Christ Jesus, and revealed it to the world by works which cannot be gainsaid.

Send a comment to the editors
NEXT IN THIS ISSUE
Article
In the last issue of your paper is a letter headed, "Christian Science,"... 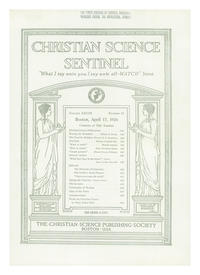