I wish to express gratitude for benefits received through...

I wish to express gratitude for benefits received through Christian Science, which came to me about eight years ago, although not through a physical healing. At that time I was sure I did not want Christian Science or need it; but there was some one who, I thought, did need it, and I persuaded her to allow me to take her to a practitioner. I was allowed to remain in the room a few moments while some of the truths of Christian Science were explained. It suddenly seemed as though this was what I had been looking for all my life; and when I left the home of that practitioner, I did want Christian Science more than I had ever wanted anything.

I was asked to read to the patient; and two weeks after I began to read the textbook, "Science and Health with Key to the Scriptures" by Mary Baker Eddy, every bit of medicine in my possession was thrown away. There has never been the slightest temptation to turn to doctors or medicine since; in fact, since the first six months' study of Christian Science, during which I had occasional treatments, there has been no need of treatment for physical ailments of any kind, proving that Christian Science is a preventive as well as a restorative, as I have enjoyed perfect health. I have been healed of nervousness, indigestion, insomnia, and headaches, for which I had been treated by physicians several years with only temporary relief; also, discontent and unhappiness have been overcome. All these discords yielded very readily to Christian Science treatment. There have been other problems which seemed to need more study and patient work, but Christian Science has never failed when rightly applied.

Send a comment to the editors
NEXT IN THIS ISSUE
Testimony of Healing
When I count my blessings I know not where to begin,... 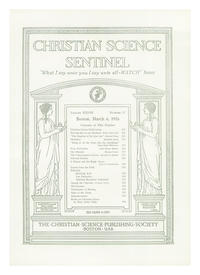