In your recent issue, in which reference is made to a conference...

Edgar G. Gyger, Committee on Publication for the State of New York,—Brooklyn

In your recent issue, in which reference is made to a conference of Presbyterian ministers at Stony Brook, Long Island, one of them is quoted as having said, "Evolution is the biggest humbug in the world outside of Christian Science." Surely the reverend doctor does not speak as one who has informed himself on the teachings and practice of Christian Science, the great religious movement which celebrated on July 4, 1926, the fiftieth anniversary of the beginning of the Christian Science denomination. To call Christian Science a humbug is to impugn the intelligence of a constantly growing army of devout Christian men and women, whose lives have been regenerated, purified, and happified through its sacred ministry. Thousands have testified that the Bible has become an open book to them, and a daily companion, through their study of the Christian Science textbook, "Science and Health with Key to the Scriptures." The minister could well profit by the counsel given to her followers by Mary Baker Eddy, Discoverer and Founder of Christian Science (ibid., p. 444): "Students are advised by the author to be charitable and kind, not only towards differing forms of religion and medicine, but to those who hold these differing opinions." And she adds: "If ecclesiastical sects or medical schools turn a deaf ear to the teachings of Christian Science, then part from these opponents as did Abraham when he parted from Lot, and say in thy heart: 'Let there be no strife, I pray thee, between me and thee, and between my herdmen and thy herdmen; for we be brethren.'" Moreover, to catalogue Christian Science as "something contrived to deceive and mislead" is not only untrue, but unchristian.

Send a comment to the editors
NEXT IN THIS ISSUE
Article
To remove any misunderstanding regarding the character... 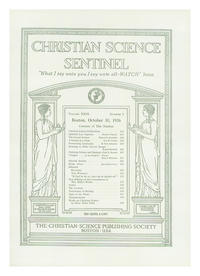