It is a great joy to feel that, as one walks through what Mrs. Eddy calls in "Science and Health with Key to the Scriptures" (p. 513) "the teeming universe of Mind," right ideas are sometimes revealed to us by way of incidents and parables, ideas which by their constructiveness leaven future action. Such an incident occurred one morning as a Christian Scientist handed the conductor of a street car a coin to pay her fare. The conductor promptly returned the money, saying it was counterfeit. She, of course, exchanged it for another from her purse; and instantly the thought came: Shall I be able to detect the counterfeit, so as to take it out of circulation? And then there quickly followed the thought: How necessary it is that each person who detects a counterfeit take it out of circulation! As she sought the coin and put it into a separate compartment of her purse, she felt glad there was one less counterfeit coin in circulation.

Then like a flash came the truth as applicable to the Science of living, the truth always waiting to enter consciousness—that every false claim of matter which comes to us must be detected as counterfeit and immediately taken out of circulation. Hand in hand with this truth came its effect, that spiritual incentive which gives impetus to vigorous, accurate, painstaking work, through the realization that every false claim that one takes out of circulation does lessen the hold of that particular supposititious claim on all humanity.

Send a comment to the editors
NEXT IN THIS ISSUE
Article
Farther In, or Out of Material Belief 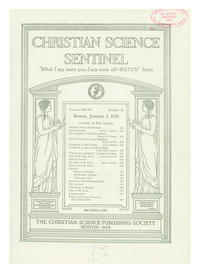