"Thy will be done"

In the spiritual interpretation of the line, "Thy will be done in earth, as it is in heaven," from the Lord's Prayer, Mrs. Eddy has written in "Science and Health with Key to the Scriptures" (pp. 16, 17), "Enable us to know,—as in heaven, so on earth,—God is omnipotent, supreme." She also says (p. 3), "We admit theoretically that God is good, omnipotent, omnipresent, infinite, and then we try to give information to this infinite Mind." In the first reference we have a clear exposition of the spiritually scientific view of prayer; in the second, the false nature of the human concept of prayer is pointed out. The realization that God is omnipotent, ever expressing His divine will, brings thought into harmony with His law, and corrects the errors of human belief with the truth of being, thus healing and saving mankind. On the other hand, the effort to inform God of that which we desire humanly, and to plead for its manifestation, is to "ask amiss."

We sometimes seem to fail in demonstration because we endeavor "to give information to this infinite Mind." We should not attempt to outline the course of divine justice and mercy, but learn instead to recognize God's ever operative law. We should recognize the blessing of ever present Love, instead of endeavoring to bring about a change in our affairs or environment through the belief in human will. Human will, which is the supposititious antipode of the divine will, insists that man can be separated from God; but the understanding of the divine all-power silences mortal will and demonstrates man's perfect unity with God. 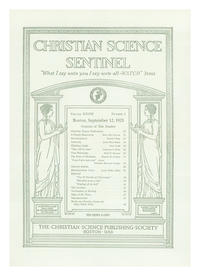