Perhaps no appeal coming from any single nation meets with a more sympathetic hearing from the rest of the world than the wish for security against all aggressors. This appeal comes to-day in a steadily ascending chorus from many states of differing degrees of military power, all of which are seeking the material aid of alliances and guaranties to protect them against more powerful, or perhaps more aggressive, neighbors. In an aspiration for security, one nation grinds another into dust; peoples are taxed beyond endurance to support large armies, and navies both aërial and aquatic; ententes, alliances, and secret treaties are again coming into existence, and a League of Nations is endeavoring to maintain that international harmony which can be assured only when divine Principle, not fear, revenge, or selfishness, shall be the governing power of the world.

What is this security which all nations are seeking, and which only a few believe themselves to possess? Is the greatest naval power of Europe really more secure than Switzerland, which has not a ship? Is the strongest military power of the continent more secure than Denmark, whose army is scarcely more than a considerable police force? Is not security, after all, more a state of thought than the product of army divisions, aircraft, battleships, and submarines? 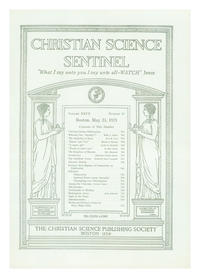