NAUGHT but Christian Science can define the Christlike touch. It is like the balm of heaven; it is the very highest form of compassion. A consciousness imbued with thoughts of compassion may be likened to the syringa shrub which one may pass on a dusky evening while walking along a country lane; though unseen with the eye, one becomes aware of its presence by the sweet aroma it exhales. Just so is it with a mind filled with thoughts of love and tenderness: it is constantly reflecting joy and gratitude; it is always moved by the distresses of others; it is always ready to be helpful. A consciousness so imbued heals spontaneously.

The familiar story of Ruth in the Old Testament furnishes a helpful lesson, and shows the value of cultivating this most desirable quality of thought. The story is the domestic history of a family of simple people who were compeled by the urgency of famine to abandon the land Canaan and seek asylum in Moab. Elimelech, the head of the family, early passed away in the land of his sojourn, and his two sons soon afterward took themselves wives. One son married Orpah, the other, Ruth. Shortly afterward these two young men died, and Naomi, the widowed parent, resolved to return to her native country and kindred. The filial affections of her two daughters-in-law were put to a severe test. Ruth stood the test of true compassion and selflessness, while Orpah, thinking chiefly of self, decided to part from Naomi. By cleaving to her bereaved mother-in-law, for the sole purpose of comforting her, Ruth was unexpectedly rewarded by her betrothal and marriage to Boaz. From this union sprang Obed; from Obed, Jesse; from Jesse, David; and from the house of David came our Saviour. So Ruth has the great distinction of being named as one of the ancestors in the genealogy of Christ Jesus, while Orpah is never again mentioned in the sacred Scriptures. What a vast gulf exists between selfishness and unselfishness! One who permits selfishness to govern his thinking shuts himself out from Truth; while another, governed by unselfish thoughts, basks in the warm sunshine of Love. 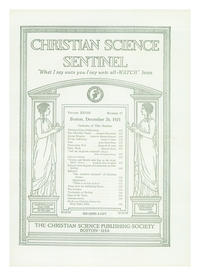