It is true that Christian Science is a "great thing" and...

Theodore Burkhart, Committee on Publication for the State of Oregon,—Portland

The testimony of the physical senses—alias carnal mind—seems to determine one's comfort or discomfort; but as Mary Baker Eddy, the Discoverer and Founder of Christian Science, says in "Unity of Good" (p. 33), this "self-testimony of the physical senses is false." A knowledge of that fact, together with an understanding of God and how to apply this understanding to the problem on hand, as taught in Christian Science, enables us to accept and realize the truthful testimony of spiritual sense, which brings nothing but harmony into our experience.

Send a comment to the editors
NEXT IN THIS ISSUE
Article
Extracts from Reports of Christian Science Committees on Publication for the Year Ended September 30, 1924 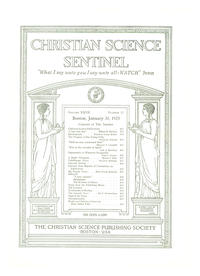