"The ripening of mortal man"

The five physical senses bear no reliable testimony respecting the realities of existence, but deal solely with the illusory phenomena of so-called mortal mind. There is in reality only one Mind; and what Mary Baker Eddy, the Discoverer and Founder of Christian Science and the author of its textbook, "Science and Health with Key to the Scriptures," designates as mortal mind, is false mentality, a mere supposition, the seeming opposite of divine Mind or God. Mortal mind cannot take cognizance of the ideas of God; and God, being "of purer eyes than to behold evil," does not know of its claim to existence. Truth is discerned and comprehended by thinking which is in harmony with the activity of immortal Mind, the divine, creative Principle.

The deceptive character of so-called material sense may be illustrated by an examination of the phenomenon of sound. Materially considered, this sensation results from the stimulating action of atmospheric or other vibrations upon the nerves of the ear. Outside of ourselves it cannot be said to have existence; it is subjective, and must be distinguished from the vibrations which are a necessary condition to its existence. It is to be observed that even after we have closely examined the nature of its manifestation it still seems external to us; and this is because material sense is ever deceiving and self-deceived. In this connection Mrs. Eddy says (Science and Health, p. 485): "Material sense is an absurd phrase, for matter has no sensation. Science declares that Mind, not matter, sees, hears, feels, speaks. Whatever contradicts this statement is the false sense, which ever betrays mortals into sickness, sin, and death." According to this false sense, mortals seem to be conscious of all manner of inharmonious and evil conditions; and human experience consists very largely of an effort to get rid of the ills that claim to afflict mankind. So long, however, as relief is sought through the aid of matter, no progress is made; for the belief that matter is real and is substance, that it enjoys and suffers, lives and dies, is the procuring cause of all human discord; and it is obviously true that this illusion must be dispelled before harmony is realized. 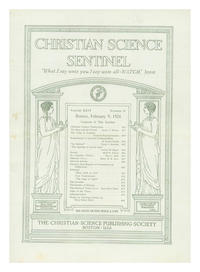