The Bible declares that "God is love."

The Bible declares that "God is love." Does divine Love itself, that infinite Love which is unutterably tender (the understanding of which even by the most advanced Christian to-day is infinitesimal), burn the object of its love? That is impossible. The motive of one who willfully thrusts his hand into a fire must be taken into account. When this is examined it will be seen that it is not for the sole purpose of glorifying God. Christian Scientists have proved over and over again the efficacy of an understanding of the love of God. They have been able to heal bad burns so completely that neither scar nor mark was left. The incident and its supposed effects, so foreign to the operation of divine Love, have been completely eliminated. Burns are not in accordance with the dictates of divine Love. They are experienced only as a result of the false educated belief in a supposed power apart from God; and this belief is destroyed by the understanding of the perfection of God and His creation, including man in His spiritual image and likeness. The effects of fire can be overcome to-day in the same way that they were overcome by the three Hebrew captives, who, although apparently not able to prevent the evil nature of the carnal mind operating to the extent of casting them into the fiery furnace, had sufficient understanding to nullify the evil result which would have ensued, even to the extent that on their bodies "the fire had no power, nor was an hair of their head singed, neither were their coats changed, nor the smell of fire had passed on them."

The Christian Scientist's position with regard to the employment of a doctor is the same as that of Christ Jesus. He never employed a doctor; nor did he ever recommend one when appealed to for healing. He had no faith in material remedies himself; nor did he teach reliance on such remedies. His mental attitude is summed up in his words, "Have faith in God." Christian Scientists accept Christ Jesus as the Way-shower. If the use of medical remedies is good to-day, it would have been good in his time. Understanding so much of God's love and power and having such a wonderful love for humanity, he would not only have known the specific material remedy for every specific disease, but would have made it known for every one's benefit. He, however, did nothing of the kind. He turned the thoughts of those who sought his aid away from matter to Spirit as the only true healer. If that part of the gospels which relates to the healing of the sick by spiritual means only were deleted, the record of Jesus' life would be meager, and a vital need of humanity be left unsatisfied.

Send a comment to the editors
NEXT IN THIS ISSUE
Article
Christian Science affirms that correct thinking does heal... 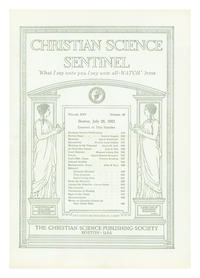