It is recorded in Mark's gospel that upon a certain occasion the Master came into the country of the Gadarenes, and was there confronted by one who, being insane, dwelt among the tombs, and was so uncontrollable that no one could bind him, even with chains. Jesus, however, seeing the extremity of his plight, commanded the evil beliefs to come out of him and to enter no more into him. Thereupon the afflicted one was immediately restored, and sat at the feet of Jesus, "clothed, and in his right mind." He afterwards requested of Jesus that he might remain with him, but the Master "suffered him not," asking him to go home to his friends and to tell them what great things the Lord had done for him. The Gadarene departed, and began to publish in Decapolis the good tidings of his healing.

The keynote of Jesus' ministry of healing was the destruction of all ungodlike thinking, in order that his Father and our Father might be more abundantly and completely glorified, and His kingdom established on earth. Hence he knew, as no one else has ever known, that the healing of sin and sickness through spiritual understanding clears one's vision to see and understand God still better. In acquainting ourselves with God, health (holiness) is being gained, and we apprehend that which was prophesied of John the Baptist in his mission of preparing the way for a fuller realization and expression of the Christ, Truth,—"To give knowledge of salvation unto his people by the remission of their sins." 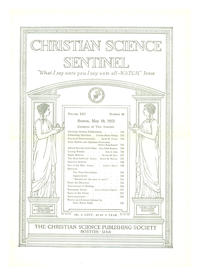