Genuine success follows from the application of the qualities of infinite Mind. It can be expressed by all individuals, but is never personal. Just as no honest person would begrudge another his honesty, so no successful one should begrudge another his honesty, so it is not to the advantage of honest men for their fellow-men to be dishonest, but just the reverse, so it is not to the advantage of any one for his fellow-man to be a failure. The honesty which each individual expresses blesses mankind as well as himself; in like manner, the genuine success which each one expresses blesses all the world as well as himself. The one who is ordinarily moral would never dream of inciting or aiding another to be dishonest, and expect thereby to improve his own manifestation of morality; in like manner, we should never wish or hope for the nonsuccess of our fellowmen and expect thereby to enhance our own possibilities of success. It is decidedly to our advantage to inculcate the hope of success in our neighbor's heart; for in so doing we come into the realization of the infinite character of success, which expands beyond that for which we both may be striving.

Rivalry, jealousy, envy, greed, are apt to be the accompaniments of a limited sense of success. These lead to those subtle serpents of depreciation,—deprecatory gestrues, little shrugs of the shoulders, the cynical smile, the superior look, commiserating comment, and even the worse phases, such as slander, libel, and all their noxious brood that would suffocate honest endeavor. We may be certain of this, that if we are trying to lower the prestige, position, or success of another in order that our own may appear in mountainous relief, then we are precipitating a more or less certain journey to perdition for ourselves. Nor must there be any hypocritical approval of our neighbor,—no conventional or meaningless utterances of good wishes, but a sincere and heartfelt support, which will be felt although few or no words pass our lips. 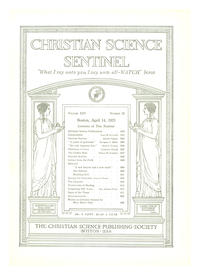