In Christian Science we find a well-balanced opportunity to be both Christian and scientific. It has sometimes been found difficult to be a Christian because of ignorance of how to be Christian; while the endeavor to be scientific and not a Christian leaves the heart out of life, and we have the clanging cymbal without love. This latter endeavor is where the foolish hobby may appear: the endeavor to be so scientific that we forget to be Christian is apt to include a fear that to be Christian, to be compassionate, may not be fully scientific. This tendency naturally misses the true incentive of brotherly thoughtfulness, and becomes a cold abstraction, finding expression in metaphysical mouthings without the love that binds up the wounds of the world and heals the ills of sick humanity. This is straining out the gnats of small things and swallowing the camels of bigotry and egotism. One should not attempt to be just a Scientist in the sense thus indicated, but to be what our Leader desired,—a Christian Scientist. Even so, we must not endeavor to demonstrate merely Science, but Christian Science.

Mrs. Eddy, in "Science and Health with Key to the Scriptures" (p. 367), shows the true balance between Christianity and Science when she says: "The tender word and Christian encouragement of an invalid, pitiful patience with his fears and the removal of them, are better than hecatombs of gushing theories, stereotyped borrowed speeches, and the doling of arguments, which are but so many parodies on legitimate Christian Science, aflame with divine Love." How clear is the connection between the Christlike "pitiful patience with his fears" and the scientific "removal of them" in the quotation just given! At times the so-called human mind would be so exact in the statement of its false sense of spirituality that the endeavor becomes ludicrous, and the sorrowing heart is thereby driven away, instead of being attracted to God's healing. Many a wrong impression is given of Christian Science through this attempt to be scientific, while forgetting to be Christian. The fact is that the two are so closely one that scientific living is Christian, and to be Christian is to be scientific: but much parading of the letter of Christian Science may give a wrong impression. 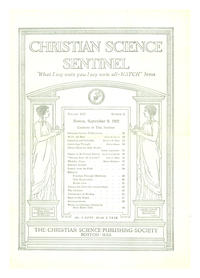