The Adornment of Meekness

The quality of meekness presents a state of thought which is not easily incited to resentment. In the Greek language, the word signifies an easiness of spirit which adjusts itself to every incident and makes the possessor of it comfortable to himself and to others. The Latins included in the meaning of the word an allusion to the taming of creatures wild by nature, making them governable and friendly. This hint of discipline well expresses the scientific conception of meekness as that grace which subdues the impetuous disposition, teaches a man the necessity and nature of submission, and reveals the authority to which submission is due. Peter had learned much of the value of self-discipline; and the impatient ardor of his nature had been largely superseded by quiet spiritual strength and confidence, when he recommended the Christians to whom he wrote, to consider the spiritual "ornament of a meek and quiet spirit, which is in the sight of God of great price."

The world has commonly looked upon meekness with considerable contempt, because it has misinterpreted this quality of lofty spiritual beauty as often a weak acquiescence in disagreeable conditions. Materiality is unable to comprehend the element of obedience inherent in meekness, because materiality is itself the essence of rebellion. Although professing Christians have done better than has the world, in so far as they have acknowledged meekness as one of the essential spiritual graces, yet they have so frequently accepted the world's definition of meekness as an irresolute compliance with tyrannous conditions that they not only have dulled their own desire to express it, but have by their remissness become at least partly responsible for the continued general misconception of this quality. 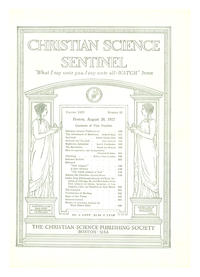