Having read many helpful testimonies in the Sentinel,...

Having read many helpful testimonies in the Sentinel, I am sending mine, hoping that some one may be benefited. I have had several healings through Christian Science, but wish to mention this one especially. While out hunting late one afternoon I was bitten by a rattle-snake. With much difficulty I reached my home in about three hours, in which time I was affected with blindness and nausea; also, at times I was unconscious. I asked my mother to telephone a practitioner at once, whose aid I received. About half an hour after, the wound began to discharge the poison; and in one hour I was healed.

For this great healing and others I am very thankful to God, and to Mrs. Eddy, who so lovingly has given us the truth.—Fred C. Smith, Tallahassee, Fla.

Send a comment to the editors
NEXT IN THIS ISSUE
Testimony of Healing
While my heart is overflowing with gratitude, I wish to... 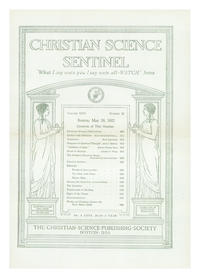