Continuing in the Word

One of the very frequent testimonies given by Christian Scientists at their Wednesday evening services relates to the changed aspect of the Scriptures when viewed in the light of Christian Science. Before becoming interested in Christian Science, some have been taught in childhood to love the Bible, but have laid it aside in later years as of no practical value; others have loved it for its literary merit; while yet another class has, perhaps, tried to explain it away, from the basis of natural science, regarding as impractical or impossible the works commonly termed miracles. However varied the experiences of the speakers, every one who takes up the study of Christian Science, understandingly, tells of the joy and wonder he feels at the flood of light which it radiates upon the Holy Scriptures; for the unbiased study of "Science and Health with Key to the Scriptures" leads to an entirely changed point of view concerning the practical import of both the Old and the New Testament.

With each overcoming of error through the application of the teachings of Christian Science, the writer has found that some Scripture text has unfolded to thought the new and more spiritual meaning. That the promises in God's Word are not mere assurances of peace and safety to His children, but are statements of law, becomes more apparent with each demonstration of the Principle of Christian Science, the promise of deliverance being accompanied by a requirement or demand which must be obeyed to bring this law into apparent operation. Success in demonstration depends not so much upon faith in God's Word to heal as upon our obedience to the requirement of His law, our response to its demands. 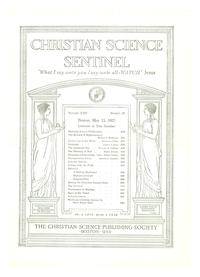