Come Out and Be Separate

Paul, in his second letter to the Corinthians, after making emphatic statements and urgent appeals to overcome the carnal instincts and turn wholly to Spirit, quotes from an ancient writer this command: "Come out from among them, and be ye separate, saith the Lord, and touch not the unclean thing." In his own struggles with and conquests of the flesh, he had proved that obedience to this command is not only a possibility but a necessity, in order even to approach the divine model set forth in the words, "the measure of the stature of the fulness of Christ." It may not be assuming too much, however, to assert that until Christian Science came, revealing more clearly the spirit of both the Old and the New Testament teachings, many of the ancient sayings, including those of the greatest of all teachers, were not spiritually comprehended in their day or ours. The text under present contemplation, for instance, was grossly misapprehended by the early Christians, who felt that to "come out from among them," meant literally to separate themselves from others whom they deemed less consecrated, and depart into places apart, whence no "unclean thing," apparently, could appear to tempt them.

We see to-day, of course, how woefully wrong was their interpretation of this truly wonderful passage. Perceiving only the letter which, according to Scriptural authority, "killeth," they missed altogether the spirit of the command which, according to the same authority, "giveth life." This misconception did indeed kill not only the ability to follow the intent of the Biblical teachings but the moral and spiritual perceptions along many lines, so that apparent obedience to divine commands frequently resulted in the destruction of the sense of morality, and the worst atrocities to which mortal mind is supposed to be heir were committed in the name of obedience to God's commands. 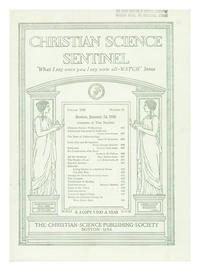