Error Cast Out of the Temple

Matthew tells us that at the time of the Passover Jesus went into the temple, where he saw various conditions which were letting the things of this world keep out of consciousness the spiritual things. When he found the people selling and buying in the temple, he made a scourge of small cords, and drove them all out, as well as the sheep and oxen. He poured out the money that had been used in the exchange of material things in the temple; he overthrew the tables upon which the money was placed for worldly traffic in the place where God should be worshiped "in spirit and in truth."

Many have tried in vain to buy happiness. After failing to obtain surcease from disease by means of matter and drugs, they have turned away in despair, and have turned toward the temple of Christian Science with a hope that they might find the "pearl of great price" and be healed. Some are not willing, however, to give up all trust in material means, but like the rich man who came to Jesus to ask what he needed in order to obtain eternal life, they go away sorrowing after they are told that they must give up all trust in material things, for they think they have great possessions. Some still have faith in material remedies; some have great fear; some pride; others fear that their friends, their churches, their relatives, or their political constituents will know about their interest in Christian Science. Some with much of this world's riches come trusting in them for the present and also for the future. Some come who are puffed up with family pride and name, believing that God needs their help to establish His kingdom on earth. They talk of how much good they could do for Christian Science if they could be healed through it, but they demand that they first be healed, before they are willing to extend this helping hand. To all such, Christ, Truth, says as of old, "Take these things hence; make not my Father's house an house of merchandise." If they do the Master's bidding, they see a great light—and are then healed. 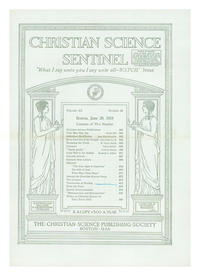