When Jesus received word from Mary and Martha that...

When Jesus received word from Mary and Martha that their brother Lazarus was sick, he abode two days still in the place where he was and then said to his disciples, "Our friend Lazarus sleepeth; but I go, that I may awake him out of sleep." And the disciples said, "Lord, if he sleep, he shall do well." "Then said Jesus unto them plainly, Lazarus is dead."

The disciples should have been familiar with the Old Testament use of the words asleep and awake for death and life. When Elisha sent his servant, Gehazi, to lay his staff on the face of the dead son of the Shunammite woman, the servant did as he was bidden, but returned to say, "The child is not awaked." If the disciples did not understand such language it was no wonder the people generally could not comprehend when Jesus said concerning the daughter of Jairus, "Weep not; she is not dead, but sleepeth. And they laughed him to scorn, knowing that she was dead."

Send a comment to the editors
NEXT IN THIS ISSUE
Article
The kindly spirit in which the speaker at Christ Church... 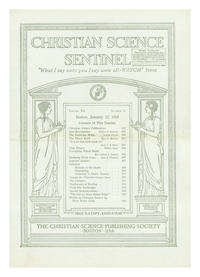