As an introduction to the lecture this evening it may be of interest if I tell something of my own experience in Christian Science. I have been identified with the Christian Science cause for about seven and one half years. I had no leaning toward this teaching, but on the contrary had strong antagonism toward what I believed it to be, and on more than one occasion publicly denounced it. During the later years of my ministerial life I had much uneasiness about the creeds and practices of my church; in brief, they did not justify themselves in face of the necessities of men. About this time Christian Science was brought to my notice, and chiefly on account of the friend who mentioned it to me, who had by this means been healed of long standing insomnia, I was induced to read the literature. At once I was surprised and interested; it was so different from what I had expected.

Send a comment to the editors
NEXT IN THIS ISSUE
Testimony of Healing
I wish to bear testimony to what Christian Science has... 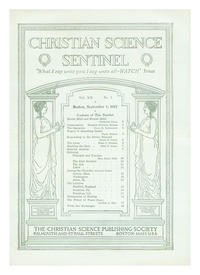