The First Commandment is said to include the other nine commandments in its eight short, teeming words. The writer experienced no difficulty in placing all except the fourth commandment at unity with the first; but whenever the fourth commandment came up for study and unfoldment, especially in Sunday school work, its highest significance seemed veiled from vision, and an almost discouraged sense of limitation fettered a clearer perception of its teachings. Never for an instant did it appear that this commandment held less significance or spiritual value than the rest, but only that limited vision seemed to fall short of penetrating its treasure.

One of these days when the fourth commandment came up in the Sunday school to be discussed the following Sabbath, an aggravated sense of dissatisfaction in its limited interpretation to the teacher appeared, simultaneously to be overthrown. This sense doubtless sprang from the fact that the class in which the commandment was to be unfolded was exceedingly alert and receptive to clear, demonstrable statements of truth. A great longing for light to make more vital the unfoldment of the commandment, brought the realization that "the preparations of the heart in man ... is from the Lord;" that no strained human effort or anxious desire could dispel the darkness; that only the light of Truth could dispel it, and that without strain or anxiety. A realization of ever present light followed, of that light in which "is no darkness at all." Ah, how many times the willingness to cry, "Let there be light," has burst resisting bands of material limitation and found itself at-one with the response, "And there was light"! The greater light which dawned upon her consciousness at that time has made the fourth commandment vital in the writer's experience ever since. 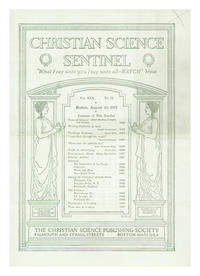