In the opening sermon of a revival meeting a bishop is...

The Christian Scientist avails himself of the divine Mind in his ministry, and through prayer he demonstrates that God is a very present help in times of trouble. The Christian Science text-book, "Science and Health with Key to the Scriptures" by Mrs. Eddy, begins with the chapter on Prayer, and the first few lines read as follows: "The prayer that reforms the sinner and heals the sick is an absolute faith that all things are possible to God,—a spiritual understanding of Him, an unselfed love." In the Preface of the same work, on page xi, Mrs. Eddy writes: "The physical healing of Christian Science results now, as in Jesus' time, from the operation of divine Principle, before which sin and disease lose their reality in human consciousness and disappear as naturally and as necessarily as darkness gives place to light and sin to reformation. Now, as then, these mighty works are not supernatural, but supremely natural. They are the sign of Immanuel, or 'God with us,'—a divine influence ever present in human consciousness and repeating itself, coming now as was promised aforetime, 'To preach deliverance to the captives [of sense], and recovering of sight to the blind, to set at liberty them that are bruised.'" 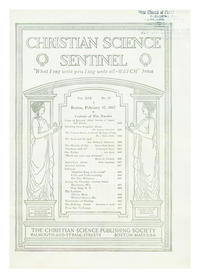