All over the world Wednesday evening meetings are held by Christian Science churches and societies for the purpose of hearing and giving testimonies to the healing and regenerating power of Christian Science. In Section 24 of Article VIII of the Manual we read: "Testimony in regard to the healing of the sick is highly important. More than a mere rehearsal of blessings, it scales the pinnacle of praise and illustrates the demonstration of Christ, 'who healeth all thy diseases.' " Such are Mrs. Eddy's far-sighted reasons for establishing these meetings, and her citation of Paul's command to "glorify God in your body, and in your spirit, which are God's," is a further injunction to her followers which is all too insufficiently heeded.

We attend these meetings with the desire and expectation of hearing testimonies, but do we sufficiently realize that we cannot hear them unless we are ourselves contributing? We are all willing to bear testimony to the power of Truth, yet often we sit silent. Why? There are various reasons, perhaps the two most prevalent being diffidence and nervousness, although we know these conditions should not exist in Christian Science. Another reason, especially in a small church, is that existing in the thought of one who is ever ready to give testimony, but who says, "What is the use of my getting up and saying the same thing over and over again?" Yet this very one will be the first to admit such a reason to be quite invalid. Another reason often adduced is an inherent dislike to speak about one's self,—a sense of self-depreciation which out of Science is very praiseworthy, and in Science equally blameworthy. Let us never forget that the relation of an actual personal experience is far more helpful to those listening to a testimony than the recounting of cases in one's own practice or of what one has seen or heard. As in law hearsay evidence is of no value, so it is of no importance and has no place at our meetings. 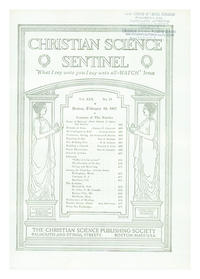