In a sermon delivered during the Methodist conference...

In a sermon delivered during the Methodist conference and reported in a recent issue of your paper, a clergyman said that he had made a study of Christian Science, and yet he adds, "In the system [Christian Science] there is no Saviour, and no one to be saved." It seems incredible that one could have made even a limited investigation of Christian Science without determining beyond all question that it declares Christ Jesus to be the Saviour. Mrs. Eddy so refers to him and his mission a number of times in Science and Health and her other writings, while the article entitled "The Saviour's Mission," in her book "Unity of Good," shows the utter impossibility of our critic's statement being correct. It seems equally impossible for one to have pursued a very extensive investigation of Christian Science without learning that its mission is to heal mankind of sin, sickness, and death—exactly the mission upon which the great Master sent his followers for all time.

In Christian Science the word real is used to designate that which is of God, and therefore eternally true and incapable of destruction, although it is recognized that sin seems very real to the human consciousness. Since sin and the suffering that results from sin were destroyed by the great Teacher, and his followers were commanded to continue their destruction, we know that he could not have regarded them as real. God's creation will exist throughout all eternity, unchanged and unchangeable as the Father Himself, and Christian Science declares His creation—all good, all Life, Truth, Love—to be the only real one.

Send a comment to the editors
NEXT IN THIS ISSUE
Article
A search of the Scriptures, and especially the life of the... 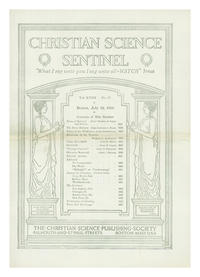