In 1907 I was induced to try Christian Science for ear...

In 1907 I was induced to try Christian Science for ear trouble. During the winter there were nineteen abscesses in my right ear and five different doctors urged the mastoid operation, but I could not bring myself to the point of taking an anesthetic. Finally a doctor said there was no use in delaying any longer and that he would operate at five o'clock that day. I consented, but went home, made my will, and set my house in order, for I was convinced I would never waken from the drug-induced sleep. Then I asked a friend if she would be with me during the operation. She refused, but being a Scientist recommended Christian Science treatment, as my fear of an anesthetic was so great, and gave me the name of a practitioner. I saw the practitioner three times and was healed without the operation. In the years that have since passed no return of the ear trouble has appeared.

A few years ago I awakened one morning with a very painful tooth. The dentist said there was a bad abscess under the gum, and wished to give me gas, being positive he could do nothing for me without it. I made an appointment for the following day, then called on a Christian Science practitioner, who promised to treat me at that hour. When I went to the dentist's office he again declared he would not work without the gas. I said, "Very well, just do whatever other work is needed and let this tooth go." He began to examine it and finally drilled a canal into the root above the gum, cut out the diseased bone, and drained the pus from the cavity without any anesthetic. When he saw my son later in the day he said: "What is your mother made of? She wouldn't take gas, but that tooth had to be opened. I gave her dental treatment which would have made a nervous wreck of most women, yet she never even flinched." Really I was not hurt at all; aside from being tired of sitting still so long, I felt no discomfort. This was a wonderful demonstration, for on former occasions a trip to the dentist would completely upset me for days before and after. For this and many other helps in time of need I am most grateful, and I try to bring Christian Science to bear on all my problems and trials.—Ethel Van Vliet Berthelet, Denver, Col.

Send a comment to the editors
NEXT IN THIS ISSUE
Testimony of Healing
About six years ago I began the study of Christian Science,... 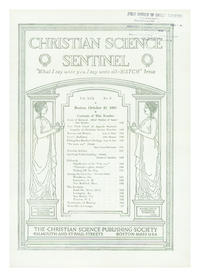