Perhaps one of the most seemingly paradoxical statements which have ever puzzled the earnest Bible student is this: "Unto every one that hath shall be given, and he shall have abundance: but from him that hath not shall be taken away even that which he hath." These words occur in the parable known as the ten talents, wherein we are told that the master of the house, having divided his goods among his three servants, went on a journey, and upon his return required from each an account of his stewardship. It is related that the servants who had received five and two talents respectively had doubled them in the master's absence, while he who had received but the one talent returned it, untouched and unharmed, to its owner. At this point, however, the average reader feels an uncomfortable sense that something is beginning to go wrong, for the rebuke to this overprudent servant appears to be out of all proportion to the wrong committed. "Thou wicked and slothful servant," the master says to him; and then the command is given, "Take ... the talent from him, and give it unto him which hath ten talents." Thereupon follows the remarkable saying quoted above, which has proven indeed a stumbling-block to theological thinkers for centuries.

One's natural sense of justice seems offended. How can it be right that the man who already has little shall be deprived of that little for no reason, apparently, except that he who already has much shall be given more? While it is true that the man had not gained anything with his one talent, he certainly had not lost anything. Does he deserve no credit for that? He may have been overprudent, but at least he took no chances. In pondering these questions, however, we remember that the story was told by our loving and compassionate Master himself, and hence we know that when rightly understood it will be found to contain not the smallest hint of injustice to any one. To understand it, therefore, we must go beneath the surface of things; we must grasp the deeper meaning of the Scriptures in the way which Christian Science teaches; just as those who seek for rarest pearls must go far below the rippling of the purposeless waves into the still, clear depths where only those who have the perseverance to seek, may find. 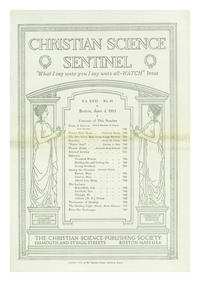