Honor to Whom Honor is Due

Let us suppose a case which will serve to make clear the point on which information is sought. A student in mathematics is confronted with a problem which does not lend itself to solution. He knows that it can be solved, but he cannot effect the solution because of his imperfect knowledge of the rule which governs this particular problem. In his extremity he appeals to his instructor, who at once perceives the difficulty, explains with patience and exactness the rule which was at hand all the time, though the student did not know it, and then the student is able by his own application of the rule to arrive at the desired result. Naturally the student is thankful for the aid extended, and highly esteems the ability of the instructor to know and apply the rules of mathematics which he himself has not discovered. But did the teacher originate the basic law of mathematics? Certainly not. The underlying principle of mathematics, of all exact science, is as old as creation. No human mind created it. It is an expression of Mind, of God. The teacher is honored because of his desire to know, because of his patient and extended investigation, and finally his command and application of the law to the attainment of a given desired end. It is apparent to all, that if one who by patient endeavor and studious application has gained an understanding of divine law receives a meed of honor and grateful appreciation, this in no way detracts from the full measure of praise due the source of that law. 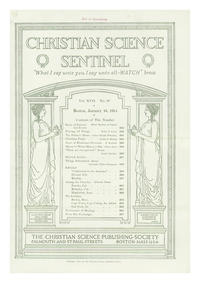