Out of the apparent rebuff to the cause of Christian Science...

Out of the apparent rebuff to the cause of Christian Science inflicted by a New York court decision, which held that a practitioner of that faith who took pay for his services to the sick violated the law, it is probable that real good will come. The decision has attracted the attention of people generally to the unjust character of the laws dealing with the treatment of the sick. As a result, there is a demand in New York that the legislature take steps to change the obsolete statutes of the state. Certainly there is something supremely absurd in a law which will permit one man to give drugs and yet which prohibits another from healing who does not use drugs.

No sane man will deny that the gentle teachers and followers of the principles of Christian Science have done much good in the world, and they are doing good daily in every city in the land. If they do nothing more than teach the doctrine of clean living and brotherly love, they are doing a great work. Clean life and the golden rule will solve many of our troubles. That the mind exercises a powerful influence on the body, cannot be questioned. Who shall say how far that influence extends, where it begins, or where it ends?

Send a comment to the editors
NEXT IN THIS ISSUE
Article
A friend has sent me for comment or reply a letter which... 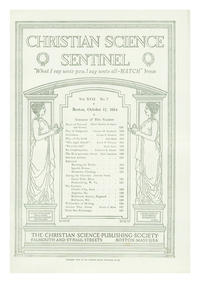