Some time ago I read Dr. Charles Edward Locke's book...

Some time ago I read Dr. Charles Edward Locke's book, "Eddyism," and it produced in me a violent prejudice against Christian Science, amounting to hatred, more like murderous resentment; but since I had always thought myself an open thinker, a sense of injustice dwelt with me, so I decided to investigate the teaching of Christian Science fairly. I obtained the text-book, "Science and Health with Key to the Scriptures" by Mrs. Eddy, and other authorized books bearing upon the subject, and can say that investigation has proved that the prejudice created by the book referred to was wholly unwarranted, and that it has now given place to a love for the pure and elevating Christianity presented in the teachings of Christian Science. The lessons I have learned during this investigation have made it impossible for me to bear such murderous prejudice as was engendered in me before I began.

It seems indeed a shame that professing Christians should continue such vicious attacks upon others. What is Christianity? Surely not that which creates hatred and encourages other violent propensities. 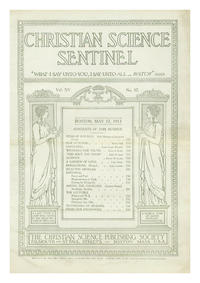