You say "there has been no good argument so far to...

You say "there has been no good argument so far to convince the world generally that God permitted man to discover wonderful remedies if He intended us to depend upon prayer alone." What if these "wonderful remedies" are misapplied ? The inebriate might argue that it is entirely proper for him to drink all the whisky he desires because God permitted man to discover it. He might argue that it is proper to indulge in many forms of sin because human invention has sought them out and introduced them. You may be right in your assumption that the general public has not yet become convinced as to the value of Christian Science as a remedial agency, but on the other hand you might be justified in entertaining a doubt as to whether the drugs which are offered as curative means are truly "wonderful," in view of the fact that almost the entire human race becomes first mildly sick, then grows worse, and then dies while these "wonderful remedies" are being administered according to all the ingenuity of modern physicians.

Your statement, "If there were an absolutely certain cure for diphtheria and some physicians refused to use it, they would undoubtedly be jailed," is very well put. "If" there were an "absolutely certain cure," or even an approximation thereto, the situation would be different. In fact, the results of the various methods and means of treating the sick are so far from anything beyond experimentation that it would seem the wiser plan to allow everybody to choose his own method of experiment. We can all agree upon the importance of sanitation, purity, and cleanliness both as to mind and body, the importance of refraining from a discussion of disease and of allowing sick folks to mingle with others than those who have them in charge, but as to medicine it seems best to let each one make his own choice.

Send a comment to the editors
NEXT IN THIS ISSUE
Article
Referring to an address before the graduates of the... 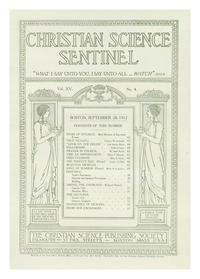