The special report on religious bodies compiled by the...

The special report on religious bodies compiled by the bureau of the census, gives the number of church-members in the United States as thirty-three millions in round numbers. Each one of these persons professedly believes in God. If each were to be asked to give a definition of God, a large majority would undoubtedly agree that God is a person and an inflexible and righteous judge. They would also admit that Jesus has thrown more light on the character and nature of God than has any other teacher.

Nothing can be more important than to know, if it be possible, what God is, and what are His nature and attributes. It is admitted that the Galilean Prophet had a singularly clear insight into spiritual realities, and that he spoke "as one having authority." A study of his statements about God shows them to be at variance with the belief that God is a person. On one occasion he said, "Believe me that I am in the Father, and the Father in me." Still more at variance with the popular concept is his statement, "At that day ye shall know that I am in my Father, and ye in me, and I in you."

Send a comment to the editors
NEXT IN THIS ISSUE
Article
To say that Christian Science enables one to succeed and... 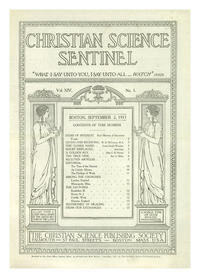