Christian Scientists who are readers of the periodicals which the wise forethought of our Leader prompted her to provide for their instruction and guidance, certainly have not lacked plain and forceful reminders of the demands, opportunities, possibilities, and duties that are brought to them in these times. From a variety of view-points watchful, alert, and capable students have been directing the attention of their fellow Christian Scientists to the needs of the present. History is fast being made, but what the story will be depends upon the fidelity with which the various obligations are being fulfilled by each one in his or her place. With the Bible and the Christian Science text-book, "Science and Health with Key to the Scriptures," Christian Scientists are equipped to meet every responsibility wisely and efficiently, and often in so doing to afford to those about them practical and impressive demonstrations of the scientific basis of their religion.

Recently, due to peculiar circumstances, there has been "precept upon precept; line upon line, line upon line; here a little, and there a little," touching the obligations of Christian Scientists to themselves, to their fellows, and to The Mother Church and its government. But only inferentially has there been anything set forth that could be made applicable along the lines of the duties of Christian Scientists in the highly important matter of citizenship. It may seem strange and incomprehensible, nevertheless it is a fact, that there are some who hold the thought that because they are Christian Scientists they should eschew politics and everything kindred thereto; and if they persist in this attitude, they can but become apathetic, uninformed as to the methods of government, political issues, and public men, neglectful of their suffrage right, and therefore fail to have influence with those who are in authority.

Send a comment to the editors
NEXT IN THIS ISSUE
Article
"FORBID THEM NOT." 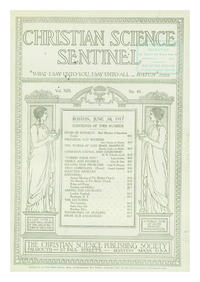