Much as is being accomplished at the present time by the more public methods of placing Christian Science rightfully before the world, the real work which counts, that which is most convincing of its potency, is the healing of the sick that is daily taking place through the understanding and application of its teachings. Mrs. Eddy knew this; she saw from the beginning of her great undertaking that she must prove her faith by her works before she could hope to gain a hearing, and in Science and Health (p. 109) she tells us that demonstration was a factor in arriving at the absolute conclusions of Christian Science; that its truths she had discovered must be "supported by sensible evidence," its divine Principle "demonstrated by healing the sick and thus proved absolute and divine."

Mrs. Eddy simply followed the Master's methods. The great Teacher bore a wonderful message to the children of men, but it was not until he began to heal the sick before their very eyes that the rabbis and priests began to question by what power these works of healing were wrought. They could but admit it was greater than they themselves possessed. In one of her later messages Mrs. Eddy writes: "Had not my first demonstrations of Christian Science or metaphysical healing exceeded that of other methods, they would not have arrested attention and started the great cause that today commands the respect of our best thinkers" (Messages to The Mother Church, p. 53). 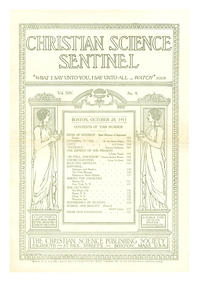