I have waited over seven years to acknowledge through...

I have waited over seven years to acknowledge through the Sentinel the many benefits I have received since I turned to Christian Science for help, and I am sure that it has not been lack of gratitude. When I first heard of Christian Science I was living in a western town, and an aunt, who is a practitioner, was visiting in our home. I had at this time just returned from Kansas City, Mo., where I had been sent by my parents to have my eyes tested. The oculist informed me that I must wear glasses all of the time for several years. They had annoyed me greatly, and it seemed that I would never become accustomed to wearing them, so I gladly agreed to take them off and accept the treatment my aunt so lovingly offered. I was healed immediately, and did not need to put the glasses on again after the first treatment.

A year later I found it would be necessary to have considerable dental work done, an ordeal which had always caused me much suffering. I was not well at the time, so I took Science and Health and the Bible and read and studied for a month or more. I then kept my appointments with the dentist, day after day for a week, and felt no discomfort. I have had a good deal of dental work done since this time, but I have not dreaded it at all, feeling confident that whatever is necessary can be accomplished without suffering. 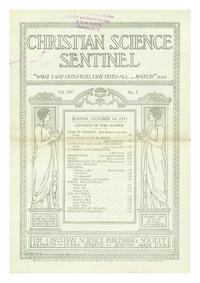