Peter was by occupation a humble fisherman, while Paul was a man of learning, of the proud sect of the Pharisees; yet these two men, so dissimilar in education and association with the world, learned to display unity of action of the highest and noblest type in healing the sick and sinning. The understanding of the one God whom they worshiped enabled Peter to heal the lame man at the gate of the temple called Beautiful, and to say to the noble woman whom they called dead, "Tabitha, arise." Through this same understanding Paul, when shipwrecked on the island of Melita (modern Malta), was able to shake off the viper which had fastened itself upon his hand and to remain unharmed; likewise, to heal the sick father of the chief man of the island.

It is recorded that when Jesus called upon Peter to follow him, he straightway left his nets and became a close companion of the Galilean Prophet; whereas Paul may not have known the great Teacher personally, and at one time considered it his duty to persecute and slay the followers of Jesus. Yet in Science these two men—the fisherman and the scholar—exhibited true unity of action, because they learned to reflect the healing power of Truth to suffering and sinning mankind. Furthermore, it is helpful to notice that although Paul had "made havoc of the church," yet this atrocious conduct was not remembered against him for evil by the members of the struggling church after he had once taken his stand in behalf of Truth. We read that there was some natural fear of him at first, when he suddenly joined the ranks of his former victims, but no expression of hate or revenge is recorded. 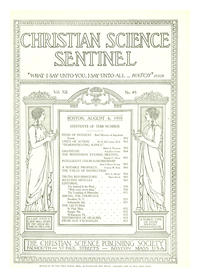