In the Christian warfare in which all mankind is called upon to take part, it would seem that today, just as when St. Paul wrote to the Ephesians, the great and often the final test of individual strength of character is seen in one's ability, after "having done all, to stand." When meeting a seeming difficulty, to counteract which all measures have been taken, in so far as one understands, and yet the battle is not won, the problem seeming to remain unsolved, one may be tempted to act as a hireling of material sense, who flees when thus tempted, instead of standing firm and unmoved as a true representative of God. He may be inclined to give way to discouragement, doubt, or fear, or at least to lag behind in the race.

The late Dr. George Matheson of Edinburgh refers more than once, in his writings, to the much greater difficulty, as he deemed it, of having to "walk, and not faint," as compared to "run, and not be weary." He thought the very appearance of inaction in the first case made it a severer test of a man's faith. This is illustrated in the instance of the psalmist, who, despite the spiritual insight which convinced him of man's absolute dominion, covering all untoward conditions of mind, body, or estate, as depicted in the 23d, 37th, and 91st Psalms, etc., still in Psalm 55 despairingly writes: "Fearfulness and trembling are come upon me, and horror hath overwhelmed me. ... Oh that I had the wings of a dove! for then would I fly away, and be at rest." His lack of courage, of faith in God, seems so complete for the time being that his one dominating wish is simply to shirk all further responsibility, and "fly away." 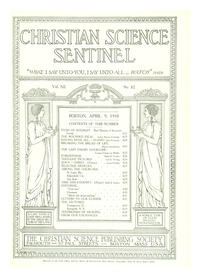